Customize the use of your personal data

It is thanks to its turbulent and quite extraordinary history that the CGN is able to pride itself on delivering
a speedy and comfortable service along the shores of Lake Geneva.

A legend in the history of the Lake Geneva region, the CGN went through troubled times and stormy weather, but never floundered or wavered, continuing to offer boat crossings, cruises, and unforgettable, comfortable, enjoyable trips to generations of passengers.

In 1823, at the initiative of Edward Church, Consul of the United States of America in France and a prominent figure in the promotion of steam navigation throughout Europe, the first Swiss paddle steamboats was launched on the blue waters of Lake Geneva, under the name "William Tell". Some fifty years later, CGN was created by the merger of the three companies, that, at that time, shared navigation services with eight boats: the "Helvétie" (1841) and the "Bonivard" (1868) belonging to the "Compagnie de l’Helvétie"; the "Léman III" (1857) owned by the "Société du bateau à vapeur le Léman” (both in Lausanne); the "Aigle III" (1857) owned by "L'Aigle, société anonyme de bateau à vapeur” as well as steamboats in joint ownership, the "Guillaume Tell II" (1853), the "Chillon" (1857) and the famous "Winkelried II" (1871) with two smokestacks. The articles of association of the new "Compagnie Générale de Navigation sur le lac Léman” (CGN - General Navigation Company on Lake Geneva) were adopted on 16 January 1873.

Gradually, lake navigation services had to contend with the advent of railways and the large influx of tourists throughout the Lake Geneva region. The CGN fleet therefore had to constantly seek expansion by providing the best comfort for travelers and an impeccable service. CGN placed several orders with Escher, Wyss & Cie in Zurich, first for a lounge boat with luxurious furnishings and dimensions unequalled at that time, the "Mont Blanc II" (1875), then for several small vessels for cabotage “waterbus” services, along with a second boat with two decks and electric lighting, the "France" (1886), and finally a fast half-lounge boat the "Major Davel" (1892). Dissatisfied with the mediocre results of tests carried out on this final delivery and greatly shaken following a serious explosion soon afterwards on its fleet’s flagship, the Company turned to a new supplier, the société anonyme Sulzer Frères of Winterthur. It placed an order for a large boat with a capacity of 1,000 passengers, which it wished to put into service for the Swiss National Exhibition of 1896 in Geneva. The boat was appropriately named the  "Genève" (1896) and marked the beginning of a remarkable collaboration between the shipowner and the builder. 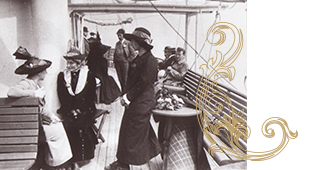 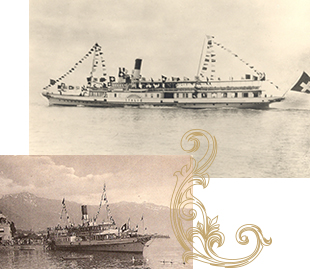 There then followed the "Belle Époque", a real peak in terms of tourist numbers. In this golden age the CGN gained momentum, growing in stature and beauty. Without a shadow of competition on the lake, money cascaded on to the ticket counters.

CGN was severely hit by the world conflict; several boats had to be immobilized. It even had to demolish the old glories of the lake, "Helvétie", "Aigle III" and "Winkelried II", as well as the small vessels, "Guillaume-Tell IV", "Simplon II" and "Dauphin", under the pretext of metal recovery.

Once hostilities ended, the Company hoped that business would pick up through an increase in visitors. After the launching of the "Simplon III", followed by the accidental loss of the "Bonivard" due to fire, the CGN and Sulzer launched two boats equipped with the latest technical developments, the "Helvétie II" (1926) and the "Rhône III" (1927). These last three deliveries were the last steamboats built in Switzerland.

Between 1925 and 1929, the company recorded four fairly good years, but its adaptation to new economic conditions proved an arduous task. It was impossible to increase prices in proportion to increased costs per mileage and the fleet only had large vessels, all expensive in terms of crews, operating and maintenance costs. From 1930 on, the financial situation became precarious.

To reduce operating costs, the CGN's new director, Mr. Edouard Meystre, considered replacing the steam engine by a diesel engine with electric transmission of power to the paddles. The "Genève" was thus successfully transformed into the first boat of its kind at the Ouchy shipyard between October 1933 and August 1934. 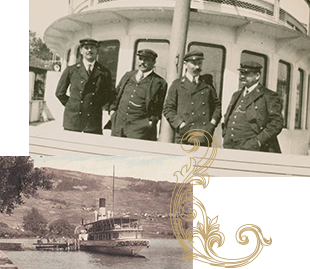 Despite two financial subsidies granted by the public authorities in 1938 and 1939, the CGN experienced major difficulties and had to consider ceasing operations. Between 1939 and 1942, it still managed to keep its workers busy with radical modernization, adapting two variable-pitch propellers on the veteran "Léman II" dating from 1857. During the war, the steamboats "General Dufour", the "La Suisse II", the "Rhône III" and the "Montreux" were immobilized because they were the largest consumers of coal. The motor-driven vessels, the "Genève" and the "Léman IV", were also out of service due to lack of suitable fuel. In 1943, the financial restructuring of the CGN became inevitable and the public authorities were again called upon to assist.

At the end of the war, business improved rapidly for the CGN even though operating costs remained high. CGN benefited from Swiss federal and cantonal subsidies for technical adaptation. It took the opportunity to replace the steam engines of three boats with electro-mechanical installations (the "Lausanne" in 1949 then the "Vevey" and the "Italie II" between 1953 and 1958). Services regained momentum as boat trips continued to be popular. In 1957, the CGN was once again ready to look to the future with confidence.

The announcement of EXPO 64 in Lausanne created an impulse of modernity, concretely expressed  with the acquisition of two excursion boats, the "Col-Vert" (1960) and the "Grèbe" (1961) from Bodanwerft AG Kressbronn (Germany), followed by two propeller boats for 700 passengers, the "Henry-Dunant" (1963) and the "Général-Guisan" (1964). During the 1960s, CGN also replaced the boilers and modernized most of its steamboats by replacing coal with heating oil (apart from the "Major Davel", the "Général Dufour "and the "Valais", which were finally demolished). At the beginning of the next decade, the "Genève" and the "Lausanne" diesel-electric boats were again replaced by two new propeller vessels, the "Chablais II" (1973) ordered from Schiffswerft Linz in Austria, and then the "Ville-de-Genève" (1978), again ordered from the shipyard in Kressbronn.

In the 1980s, the decision was made to use, in priority, paddle steamboats for long distances. The general public appreciated the smooth, quiet ride, the large spacious decks and, of course, the lounges with their dolce vita atmosphere. With the increase in cross-border traffic between Evian and Ouchy, the CGN also had a commuter boat, the "Léman V" (1990), built in Linz and then, the "Lausanne II "(1991),  again at the same shipyard, a true cruise boat for 1,500 passengers.

In 2002, in response to a request from the Board of Directors, the CGN management conducted an assessment of the vessels in service according to specific analytical criteria. This assessment concluded that the fleet was composed of vessels that were too large for off-season activity to be cost efficient. It was then decided to acquire smaller boats that could operate with a reduced crew. Five excursion motor boats, less than 30 meters in length, were ordered from the French company Merré de Nort-sur Erdre: three large excursion motor boats with a capacity of 200 passengers, the "Morges" (2005), the "Lavaux" (2006) and the "Valais II" (2008), and a pair of hydrojet-powered shuttles of the NAVIBUS® waterbus type, the "Coppet" (2007) and the "Genève II" (2007).